New data resources will be added over time.

There are many debates over metrics of state strength. One credible source of state strength data comes from the the Fragile State Index (https://fragilestatesindex.org/). The index is multidimensional and includes factors ranging from the character of the political system (e.g., elite fractionalization), economic growth and decline, and state legitimacy.

The predominate source of economic development data comes from the World Bank. The World Bank has the facilities and relationships to collect data from countries across the globe. At the same time, you will notice many missing data points and some analysts suggest that the data may not be too accurate. Explore development data on the World Bank’s online analysis databank: https://databank.worldbank.org/source/world-development-indicators

There are several credible sources of regime type data widely available online. This information tab gives you a preview of a few options.

From the website: “Freedom House is an independent watchdog organization dedicated to the expansion of freedom and democracy around the world. We analyze the challenges to freedom, advocate for greater political rights and civil liberties, and support frontline activists to defend human rights and promote democratic change. Founded in 1941, Freedom House was the first American organization to champion the advancement of freedom globally. We recognize that freedom is possible only in democratic political environments where governments are accountable to their own people; the rule of law prevails; and freedoms of expression, association, and belief, as well as respect for the rights of minorities and women, are guaranteed. More than 2.5 billion people live in countries that Freedom House designates “Not Free,” more than a third of the globe’s population.”

credible sources of regime type data widely available online. This information tab gives you a preview of a few options.

From the website: “Varieties of Democracy (V-Dem) is a new approach to conceptualizing and measuring democracy. We provide a multidimensional and disaggregated dataset that reflects the complexity of the concept of democracy as a system of rule that goes beyond the simple presence of elections. The V-Dem project distinguishes between five high-level principles of democracy: electoral, liberal, participatory, deliberative, and egalitarian, and collects data to measure these principles.”

One of the strengths of the V-Dem dataset is that it includes historical data from as far back as 1800, as well as many sub-indicators of democracy and elections.

The Electoral Integrity Project (https://www.electoralintegrityproject.com/) provides the results an expert survey on election quality at the country and election level.

One of the places to go for cross-national public opinion and attitudes is the World Values Survey (WVS): http://www.worldvaluessurvey.org/

The gold standard for cross-national public opinion data comes from the Afrobarometer: http://www.afrobarometer.org/

The Asian Barometer Survey (http://www.asianbarometer.org/) measures public opinion and general attitudes in Asia. You will have to request access to the data.

The European Union has been interested in the evolution of public attitudes for sometime. The Eurobarometer Survey is administered frequently and provides public opinion on a host of general and specific concerns: https://ec.europa.eu/commfrontoffice/publicopinion/index.cfm.

The Latinobarómetro provides cross-national data on public attitudes in Latin America on a consistent basis: http://www.latinobarometro.org/lat.jsp.

Freedom in the World 2019 Map from Freedom House 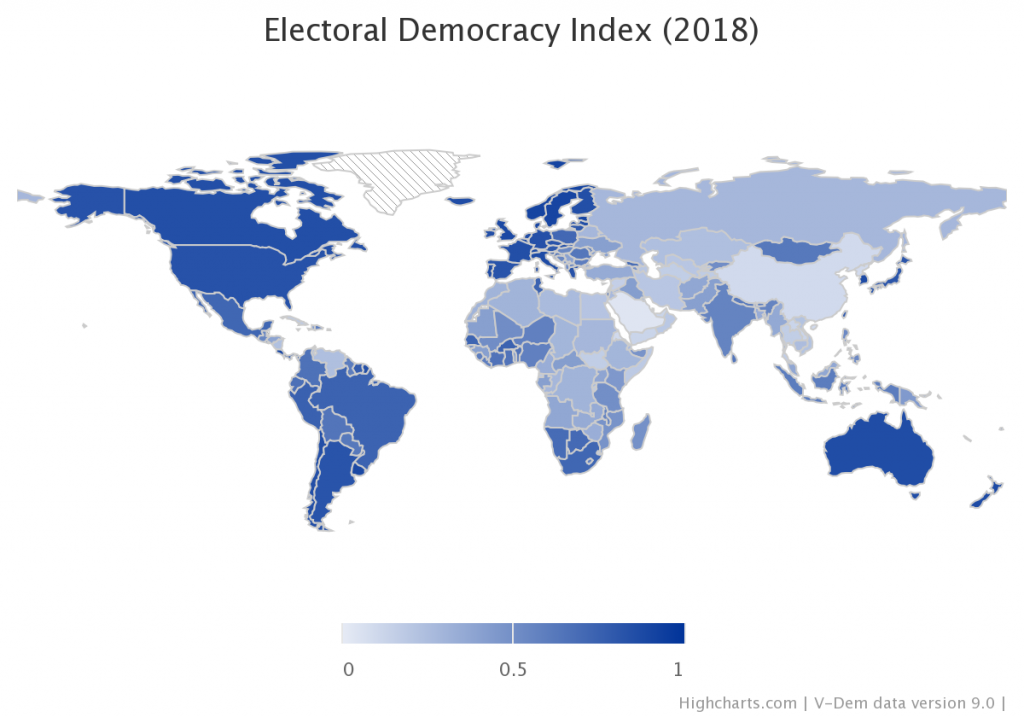